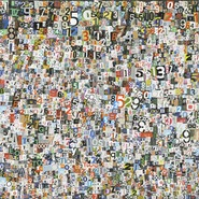 Lambert, bassist/co-vocalist Titus Brown and everybodyâ€™s soon-to-be fave new drummer Jim Crook moved to Atlanta in neighbouring Georgia in 2004, attracted by the bohemian state capitalâ€™s liberal atmosphere (Itâ€™s the New York of the South) and a fertile music scene that has spawned the likes of Deerhunter and Black Lips.

All the Saints came into existence a year later, their moniker inspired partly by an old Verbena song and partly by an outsized fleur-de-lys saints symbol which a tramp had spraypainted gold and sold to the nascent combo at one of their early gigs. â€œItâ€™s kind of a tongue-in-cheek fuck you,â€ laughs Lambert, he and Brown having been raised as strict Christians. â€œWe in the very, very heart of the Bible Belt but thereâ€™s nothing â€˜all the saintsâ€™ about our music!â€

Lambert, a committed Anglophile, was turned on to My Bloody Valentine, Ride and the Jesus and Mary Chain by an indie radio station his elder sister used to tape in the early â€˜90s - these influences are clear in the bandâ€™s dark and distinctly English-flavoured shoegaze aesthetic.