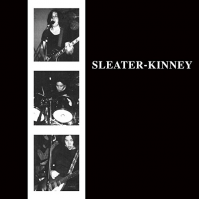 Sleater-Kinney is the first effort from the group, recorded by Nick Carrol at 486 Victoria Street in Melbourne, Australia, and produced by Tim Green and the band at the Red House in Olympia, Washington. The album was originally released in 1995 by the independent queercore record label Chainsaw Records. The line-up featured Corin Tucker (vocals, guitar), Carrie Brownstein (guitar, vocals) and Lora Macfarlane (drums).

“While their same-sex one-on-ones aren’t exactly odes to joy, they convey a depth of feeling that could pass for passion.” [Grade: A-] - Robert Christgau, Consumer Guide

The album has been freshly remastered by Greg Calbi for this release. This reissue coincides with Sub Pop’s October 21st, 2014 release of remastered versions of Sleater-Kinney’s six other albums, as well as a limited-edition, deluxe vinyl box set featuring all seven albums.