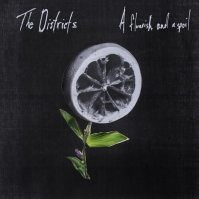 A Flourish And A Spoil

The four-piece band formed in 2009 while the members were still in high school in Lancaster County, PA. ‘A Flourish And A Spoil’ features singer/guitarist Rob Grote’s vocals front and centrr, combining equal parts ferocity and yearning as when he reflects on leaving behind suburban childhood on “Suburban Smell.” The album credits original members Grote, Connor Jacobus on bass and Braden Lawrence on percussion with Pat Cassidy joining on guitar following the departure of Mark Larson.

The Districts have toured with bands including Deer Tick, White Denim, Dr. Dog and Temples and won over fans on both sides of the pond with 2014 sets at Lollapalooza, ACL and Reading Festival, among others. Consequence of Sound says, “As performers, they’re naturals, having the confidence and stage presence of bands twice as old and twice as popular” and Interview Magazine dares, “just try not to bob your head.”