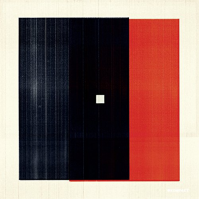 From the get-go, SIGNS UNDER TEST presents itself as a whole new ball of wax, reaching even further into the depths of JOHN TEJADA's hot-wired synth machinery, while cranking up the already stunning levels of musicality on display in his oeuvre. Opener TWO 0 ONE serves as a prime example for the sonic aplomb in place, thanks to its beautifully rendered melodies and finely tuned textures – a perfect storm made of cosy melancholy and celestial bliss. This expertly wrought piece serves as a particularly strong entry point for the album, setting the bar high for its successors.

An unabashedly brilliant listen, the album continues its thrilling journey with existential bleepfest Y 0 WHY and the bass-heavy BEACHT, followed by the intricately arpeggiated R.U.R. and brooding electronica vignette VAALBARA. The second part is ringed in by the undulating CRYPTOCHROME - another proof for JOHN TEJADA's uncanny ability to craft tracks that operate as distinguished bouncers as well as introspective meditations. The deliberate vivacity of connecting cuts RUBRIC and PENUMBRA only confirms the growing suspicion that this might be a timeless masterpiece we're dealing with.

As gorgeous as it sounds, texture isn't the only star here: a surprisingly diverse set of rhythm patterns suffuses the mesmerizing synth licks - take for example the multilayered ENDORPHINS effortlessly switching between straight techno stylings and vintage breakbeat ornaments. Meanwhile, electronic landscape painting MEADOW purrs away on its road to redemption, priming the listener for closing cut HEAVE IN SIGHT, an atmospherically rich composition that marries abstract storytelling with a flurry of reversed synth sounds.

„There's a bit more dreamy tape wobble going on throughout“, says the producer about his latest effort, „as I’ve gone quite analog tape with my delays and patches - on the verge of actually being broken, which gives them a nice character.“ It also might explain the air of intimacy surrounding the album - a quite personal listening experience taking the listener up close with its details and idiosyncracies, „maybe even more than before, as I’ve tried to cut out distractions and really focus on the production.“

The result is a record that is not meant to be trendy, even though it’s a product of analog hardware connoisseurship: „Everything is built from the ground up using hardware synths - mostly analog, but that’s a bit annoying to say nowadays. It’s not a record that fits in with any current stuff, but something that hopefully holds up as it ages. Something that hopefully reveals more on repeated listens.“ In our humble opinion, this mission has been more than accomplished with SIGNS UNDER TEST.