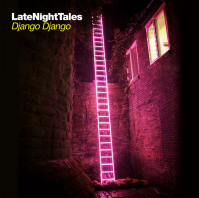 Django Django is the latest band invited to curate a prestigious Late Night Tales collection, set for release on 5th May. Like many of the best British groups, the Djangos met at art school, specifically Edinburgh College Of Art, before reconnecting in London. Django Django released their self-titled debut album on quirky French indie Because in early 2012 to some acclaim, winding up in many criticsâ€™ end of year lists (Top Ten in the NME and Top 30 in Rolling Stone, among them).

Their oddball approach to music, which sounds like the rich harmonies of the Mamas & Papas beamed through a refracting prism pointing towards Bo Diddley, Chicago house and outer-space (itâ€™s no surprise to learn that Django producer/drummer Dave Macleanâ€™s brother John was in the Beta Band, who also shared the same cinemascopic view of the pop landscape).

â€œRollicking sing-alongs, galloping into disco sunsets like whisky-addled and leather-saddled bandits on the stolen backs of prairie wild mustangs,â€ is how Django Django describe themselves. Which is another way of saying theyâ€™re pop adventurists, as at home with Mad Mikeâ€™s Underground Resistance as they are the blues rumble of Canned Heat. A bit like this delightful mix, then, which darts about like a gurgle of guppies after two too many espressos.

Check out mixes that rock between two-step delights like Roy Davis Jrâ€™s â€˜Gabrielleâ€™ to Nilssonâ€™s lyrically winsome â€˜Coconutâ€™. At one end of the Django spectrum thereâ€™s James Last, the terminally unhip Teuton, whose â€˜Inner City Bluesâ€™ shows you can never underestimate the Germans, while at the far reaches of the mix, they manage to sneak in Ramadanman (â€˜Bass Drumsâ€™) and Hudson Mohawke and Lunice collaboration TNGHTâ€™s â€˜Buggâ€™nâ€™. You can hear the echoes of influences in some of the selections, like The Beach Boys whose peerless â€˜Surfâ€™s Upâ€™ makes a welcome appearance halfway through, while Seals & Croftsâ€™ â€œSweet Green Fieldsâ€ show what sun-drenched pop can sound like when itâ€™s done well. And because itâ€™s Late Night Tales thereâ€™s a sparkling cover version of â€˜Porpoise Songâ€™, the theme from The Monkees daffily brilliant â€˜Headâ€™, an admirably lysergic termination to this waltz through popâ€™s nooks and cranberries. â€œYou should never be afraid to make a fool of yourself for art,â€ Dave Maclean once said. Letâ€™s raise a dram to Scotlandâ€™s favourite fools on the hill.

â€œWe wanted to produce a mix that represented the band. Itâ€™s what weâ€™re all into, so everyone put forward suggestions. Itâ€™s what we are as a band; and weâ€™re kids that have grown up with an obsession about our mum and dadâ€™s record collections, like â€˜50s and 60s stuff and then got into hip hop and dance music as we grew up. At the heart of it all is our parentsâ€™ collections, with our tastes mixed in. Our Late Night Tales pays homage to that.â€
Dave Maclean (Django Django)