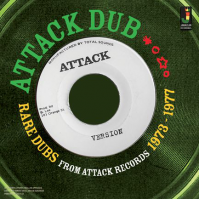 Throughout the seventies the productions of Bunny’Striker’Lee were incredibly prolific and he created a number of different labels to handle his ever expanding output.

Bunny had always worked closely with Osbourne’King Tubby’Ruddock,who had built his first Sound System in 1957.But Tubbt felt that thingsreally got going when he took on Ewart’U Roy’Beckford as his DeeJay in 1968.When Bryon Lee upgraded Studio B at Dynamic Sounds to a sixteen track recording in 1972 Striker brokered a deal for Tubby to purchase the old four track equipment.The package included the MCI console that Tubby would go on to make world famous and as they say the rest is history...

Here we look at the Attack label and have assembled a compilation of some of the finest Dub cuts released on this label....enjoy