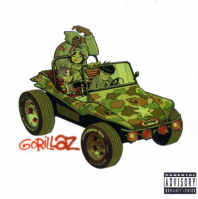 The Gorillaz claim to have found their motley crew of cartoon characters sleeping in Leicester Square, but Blur's Damon Albarn (a.k.a. 2-D) and cult cartoonist Jamie Hewlett (Murdoc) are not fooling anyone. As the ultimate experiment in manufactured image, the Gorillaz are a virtual, cartoon-character-based hip-hop band which bring together some of the wittiest, silliest lyrics and the most seriously talented musicians. Infectious old school hip-hop rhythms, rhymes and effects courtesy of Deltron 3030's Kid Koala and Del Tha Funkee Homosapien (Russel) are combined with Albarn's passion for chugging lo-fi and edgy melodies to create a seemingly raw but ultimately slick blend of styles which is all their own. This is nowhere more evident than on hit single "Clint Eastwood", which is carried along by the sound of 2-D's slurred voice and a bluesy harmonica melody interrupted by Russel's punching rhymes. But the surprises do not stop there: Ibrahim Ferrer's appearance on "Latin Simone" could have come straight from Buena Vista Social Club but for the obvious Blur-influenced piano style, while the spooky intro to "M1 A1" wouldn't sound out of place on Michael Jackson's Thriller. Backed up by Jamie Hewlett's death wish character on bass, Cibo Matto's Miho Hatori (Noodle) on guitar and occasional hyperactive vocals, and produced by Dan "The Automator" Nakamura, it's hardly surprising that Gorillaz is marked both by a sense of playfulness and a passion for experimentation.