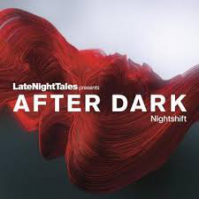 Late Night Tales welcomes back the cult figure and ultimate musical connoisseur, Bill Brewster to compile his second episode of the curated compilation series â€˜After Darkâ€™. An obscure and timeless DJled journey which begins somewhere out in the near ocean, the waves are rolling and lolling gently into the shore, while a full moon shines on the surface. Itâ€™s only faint, but somewhere nearby is the sound of bass, pulsing slowly, almost in time to the waves. Welcome back to â€˜After Dark: Nightshiftâ€™. Once again Bill Brewster comes armed with a sensitivity and sense of occasion that few other DJs possess. Delivering another batch of slow cooked musical stews, making sure the tempo stays nice and steady and the emphasis is on funk, soul, grits and corn fried chicken, Brewster has done so much digging, Late Night Tales had to hire a forklift truck and tractor. Among the unreleased nuggets, thereâ€™s the Fernando mix of The Detachments; inordinate excitement about Gino Fontaine, a tune spotted a year ago but has languished in Andy Meechamâ€™s Stafford catacombs ever since. Also unearthed are some hitherto secret recordings between Robert Fripp and The Grid, and there are also some proper club faves here, too, like the daft but brilliant â€˜Mopedbartâ€™ by Hubbabubbaklubb and the luminous â€˜Boutadeâ€™ by Mugwump, as well as killer oldies like Salsoul Invention and General Lee.