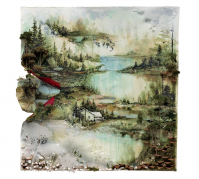 When Justin Vernon emerged from the wilds of Wisconsin in 2008 with his Bon Iver project, and the startling debut album For Emma, Forever Ago, perhaps none of us quite realised the magnitude of this unique talent. Not only did he capture hearts across the globe, but For Emma also attained beyond gold sales in the UK, and the follow up EP â€˜Blood Bankâ€™ debuted at #14 on the Billboard Top 200 and the Top 40 UK in 2009. In the intervening months and years, Vernon has collaborated non-stop on entirely new projects in varying genres with Gayngsâ€™ sassy innovation on the Relayted album, and Volcano Choir, a freeform adventure with fellow Wisconsin musicians Collections of Colonies of Bees on the album Unmap. He also duetted with St Vincent, appearing on the Twilight: New Moon soundtrack, while Peter Gabriel recorded a cover of Bon Iverâ€™s â€˜Flumeâ€™ and Bon Iver reciprocated with â€˜Come Talk To Meâ€™ for a Record Store Day limited edition 7â€ release.

And then there was the time when Kanye West called up and invited Vernon to pop down to his studio in Hawaii to collaborate on the hip hop auteurâ€™s astoundingly bold opus, My Beautiful Dark Twisted Fantasy. West sampled â€˜Woodsâ€™ (taken from â€˜Blood Bankâ€™) on the track â€˜Lost in the Worldâ€™. Vernon also appeared â€“ alongside Jay-Z, Rick Ross and Nicki Minaj â€“ on â€˜Monsterâ€™, which proved to be one of the tracks of last year. He also appeared on four other tracks and has since performed live with Kanye on numerous occasions, including the 2011 Coachella Festival.

When it came to recording the follow up to For Emma, Justin Vernon headed to his hometown of Eau Claire. Bon Iver was recorded and mixed at April Base Studios, a remodeled veterinarianâ€™s clinic located in rural Fall Creek, Wisconsin. The main recording space is constructed over a defunct indoor pool attached to the clinic.

â€œItâ€™s an unique space and destination; itâ€™s our home out here,â€ says Vernon, who purchased the structure with his brother in late 2008 with the sole intention of converting it into his ideal recording studio. â€œItâ€™s been a wonderful freedom, working in a place we built. Itâ€™s also three miles from the house I grew up in, and just ten minutes from the bar where my parents met.â€

Itâ€™s all there right away, in the thicker-stringed guitar and military snare of â€˜Perthâ€™, and â€˜Minnesota, WI.â€™ Anyone who had a single listen to For Emma will peg Justin Vernonâ€™s vocals immediately, but there is a sturdiness â€“ an insistence â€“ to Bon Iver that allows him to escape the cabin in the woods without burning it to the ground. â€˜Holoceneâ€™ opens with simple finger-picking. The vocal is regret spun hollow and strung on a wire. Then the snare-beat breaks and drives us forward and up and upâ€¦.The magical poise and restraint of â€˜Michicantâ€™. The vocals in â€˜Hinnom, TXâ€™ ease to the muffled depths, while the instrumentation remains sparse and cosmic.

From the tenderised piano and sprouting strings of arguable album highlight â€˜Washâ€™, we arrive at future single â€˜Calgaryâ€™ â€“ a worship song to everything For Emma mourned. At the point in the final track â€˜Beth/Restâ€™ when Vernon sings, â€œI ainâ€™t livinâ€™ in the dark no moreâ€ it is clear he isnâ€™t dancing in the sunshine, but rather shading toward a new light. It also provides the most â€˜Woodsâ€™-like moment on the album in terms of singular voice and production.

Bon Iver is Justin Vernon returning to former haunts with a new spirit. The reprises are there â€“ solitude, quietude and hope â€“ but always a rhythm arises, a pulse vivified by gratitude and grace notes, some as bright as a bicycle bell. The winter, the myth, has faded to just that, and this is the new momentary present. From â€˜Perthâ€™ to â€˜Bethâ€™ we go full circle and reach the summation to a remarkable second album.

Bon Iver will tour later in the year as a nine-piece band featuring most of the players on the recording.