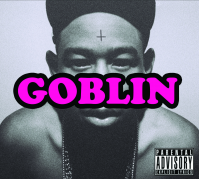 Tyler, The Creator is now set to release his second album â€˜Goblinâ€™ worldwide on XL Recordings. The 15 track album features the track â€˜Yonkersâ€™, whose Tyler-directed video has already racked up nearly five million hits on Youtube. â€˜Goblinâ€™ will be released on CD, vinyl and digital download, plus a deluxe CD version that will feature three exclusive new tracks.

Meanwhile, following year-defining US TV appearances on the Jimmy Fallon show and the MTV Woodies plus performances at this yearâ€™s SXSW which marked OFWGKTA as the undeniable festival highlight , Tyler, The Creator and OFWGKTA will be coming to the UK at the end of April. Details of their UK shows will be announced shortly.