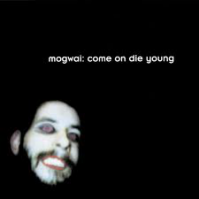 Arriving in March 1999 with an album cover that referenced The Exorcist and a title scalped from a well-known Glasgow gang slogan, you'd have expected Mogwai's 'Come On Die Young' to be an apocalypse-harbouring, pre-millennial assault on the senses. Instead, we were treated to a darkly elegiac - surprisingly restrained - response to the aural fireworks of their 'Young Team' debut from two years earlier. Recorded and mixed at Dave Fridmann's Tarbox Road Studios in Upstate New York, 'Come On Die Young' begins with a sample of Iggy Pop eulogising the genius of punk rock and ends with a track entitled 'Punk Rock / Puff Daddy / Antichrist'. This thoughtful and irreverent diptych enclosed an hour of music that was as beautiful as it was blistering and as poignant as it was unpredictable: preconceptions of what to expect from a Mogwai album, disassembled at a stroke. 'Come On Die Young' was - and remains - a hugely accomplished, elegant and important album, setting a benchmark for the fierce intelligence that would characterise Mogwai's future body of work. The reissue of 'Come On Die Young' - fifteen years after it originally hit the shelves - recognises the vital role this album played in Chemikal Underground's development as the label approaches its 20th anniversary in 2015.
CD - Double CD Set.
Boxset (Limited to 1500 Copies) - This deluxe edition of 'Come On Die Young' has been painstakingly put together by the band and label, unearthing more than an hour of bonus material including:
Previously unreleased takes from early Chem19 sessions of 'Waltz For Aidan', 'Christmas Steps', 'Rollerball' and '7-25' which featured on 'Zidane: A 21st Century Portrait'.
7 remixed / remastered tracks from CAVA, pre-dating the final Tarbox sessions.
Two previously unreleased tracks 'Satchel Panzer' and 'Spoon Test'.
Rarities 'Nick Drake', 'Hugh Dallas' and the 3 track 'Travels In Constants EP'.
The original, previously unreleased version of 'Helps Both Ways'.
A1 'San Siro' poster for Mogwai's Barrowland Ballroom show from October '99.
Boxset includes 4 x 180gsm LPs featuring original 2LP and 2LP of bonus material.
Two Chem19 Demos are exclusive to the boxset: 'Christmas Steps' and '7-25'.
Boxset includes a dvd with 320kbps MP3s and lossless WAV audio files.