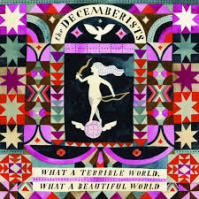 What a Terrible World, What A Beautiful World

“In some ways, this album was four years in the making,” says Colin Meloy, frontman and primary songwriter of the Decemberists. “We were on hiatus, so we had all the time we could want, no schedule or tour, no expectations.”

With the ability to work at their own pace, the resulting record, What a Terrible World, What a Beautiful World, is the band’s most varied and dynamic work, both musically and emotionally. Since their earliest recordings more than a decade ago, the Decemberists have always been known for their sense of scope and daring—from “The Tain,” an eighteen-and-a-half minute 2004 single based on an Irish myth to their last two ambitious, thematic albums, The Hazards of Love and The King is Dead. This time, though, Meloy explains that they took a different approach: “Let’s make sure the songs are good, and eventually the record will present itself.”

The Decemberists—Meloy, Chris Funk (guitars), Jenny Conlee (keyboards), Nate Query (bass), and John Moen (drums)—had announced that they would be taking a break when their touring cycle finished following the release of 2011’s The King is Dead.

They reconvened in the fall and added some more songs. Gradually, over the course of a year and a half, the album came into focus. What was initially apparent was a fuller, richer sound. “There was a grandiosity to the songs in different ways,” says Meloy, citing Leonard Cohen’s 1977 collaboration with Phil Spector, Death of a Ladies’ Man, as a reference point. “We were layering textures, adding strings and dedicated backing vocals—the early songs created the peaks of the record, and that started to dictate the overall tone and tenor.”