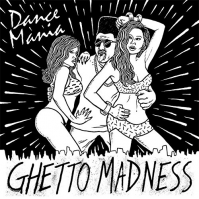 Strut return to the archives of seminal Chicago house label Dance Mania in January 2015 for ‘Dance Mania: Ghetto Madness’. The follow-up to Strut’s acclaimed Dance Mania label retrospective ‘Hardcore Traxx’ from early 2014, this new instalment places the spotlight on the raw, stripped back, hyper bpms of ghetto house and the rise of the movement’s fresh generation of stars during the mid’90s including DJ Deeon, DJ Funk, Jammin’ Gerald and DJ Milton. The album tells the story of the evolution of Chicago’s sound during the era as mix tapes circulated through local stores and DJs developed their own underground following, playing local parties in the projects. Crowds began responding to faster bpms and gangsta rap-inspired X-rated lyrics. As DJ Deeon remembers, “it bridged the gap. It made it OK for guys in the ghetto to like house again and it brought the women onto the dancefloor too.” Dance Mania was perfectly positioned to capitalise on the new sound – many of the DJs came regularly into Ray Barney’s record store and, as Chicago’s most trusted and respected label owner, he was offered the best tracks for commercial release at an early stage. ‘Ghetto Madness’ brings together some of the underground classics and enduring favourites that earned Dance Mania the title of ‘Ghetto House’s Motown’. Tracks include DJ Deeon’s party-starter ‘The Freaks’, raw DJ Funk cut ‘Computer Sex’ and Nina Kraviz favourite, Paul Johnson’s ‘Give Me Ecstacy’. Other featured gems from the archive include the dark early Steve Poindexter outing ‘Computer Madness’ and Tyree’s in-demand jam, ‘Nuthin’ Wrong’.