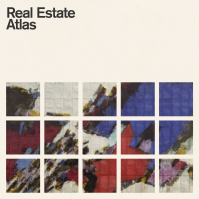 Atlas, the new album from Real Estate, was recorded over the summer and fall of 2013 with producer Tom Schick [Rufus Wainwright, Mavis Staples, Low], and the ten-song album will be preceded by the release of the single "Talking Backwards".

To commence the follow-up to their sophomore breakout, Days, founding members Martin Courtney (guitar/vocals), Matt Mondanile (guitar) and Alex Bleeker (bass/vocals) were joined by new full-time members, Jackson Pollis(drums) and Matt Kallman (keyboard) and producer Schick this past summer at Wilco's Chicago studio, The Loft. Nineteen songs were recorded in all over a two-week period and the result is the bandÂ¹s most collaborative, richly detailed album to date. 2011Â¹s Days not only earned Real Estate their second consecutive Pitchfork Best New Music, they also played a Tiny Desk concert for NPR, appeared at major festivals like Coachella and Pitchfork, and toured with The Shins and Kurt Vile.

The cover art of Atlas features a detail taken from Alexander's Mural, an iconic North Jersey landmark created by artist Stefan Knapp that once hung on the side of AlexanderÂ¹s department store for over twenty years, not far from the band's hometown of Ridgewood, NJ.