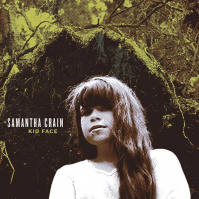 â€˜Kid Faceâ€™ is a wildly original album that stands out as a definitive statement (thus far) from an uncommonly insightful and fearlessly honest young singer songwriter. Produced by John Vanderslice, (The Mountain Goats and Spoon), Samantha Crain has delivered an instantly accessible gem, enabling her to explore the full range of her achingly vulnerable voice, with lyric and song, in which she is the narrator throughout.

Although initially inspired by the sounds of her fatherâ€™s record collection, including Bob Dylan and Neil Young, an adolescent Crain took even greater solace in the music of her home state, from the Americana of Woody Guthrie to the sonic experiments of the Flaming Lips.

Based in Shawnee, Oklahoma, and of Choctaw heritage Samantha has been building a following in the US and beyond over the last couple of years, including Swedish folk duo First Aid Kit, who took her out on tour last year and have been long time supporters of her music - â€œFor us, she is a role model and an inspiration. She is an amazing songwriter and a powerful live artist, full of energy and a great sense of humour. And what a voice!â€ - Klara and Johanna SÃ¶derberg (First Aid Kit)