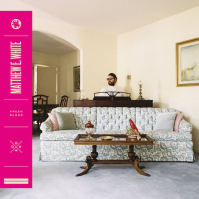 To backtrack, briefly: In 2009, White and his friends established Spacebomb to turn the tunes of songwriters they liked into grandiose, graceful statements. To demonstrate the Spacebomb ideal, White and his wide cast of musicians - possessing a vast knowledge that could pivot from the gusto of New Orleans to the verve of Detroit, from tube-amp rock to hi-fi pop - recorded a few songs he’d pieced together and called it Big Inner, hoping to show other songwriters how the system would work. In the 18 months that followed the release, White toured America and Europe extensively, sharing the stage with St. Vincent, The National, The Mountain Goats, She & Him, among many others, and signed with Domino to release Big Inner worldwide. White played major festivals, including Bonnaroo, Glastonbury, Primavera, and more, and Big Inner earned five stars in The Guardian and a spot on its year-end list, plus those of Pitchfork, Consequence of Sound, and others. Uncut called it “one of the great albums of modern Americana,” and Paste deemed White’s ensemble as the #1 “Best New Band” of 2012.

If the first album had been serendipity, every step of Fresh Blood was to be deliberate, from his co-writing sessions with longtime friend and former bandmate Andy Jenkins to his steady arrangement brainstorms with the trusted Spacebomb house band—bassist Cameron Ralston, drummer Pinson Chanselle and guitarist Trey Pollard. Simultaneously recognizing the trouble and delight that life can bring, these 10 original new songs of Fresh Blood are guides for times of joy, agony and the middle distance where we most often linger.