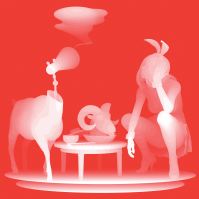 The second long player from Memory Tapes (aka Dayve Hawk) demonstrates maturation from his 2009 released debut. Hawk, who also goes under the moniker Memory Cassette, has developed his sound into an album full of great electronic pop songs with a slight melancholic lyrical twist & enough leftfield sounds & influences to keep it interesting throughout. â€˜Yes I Knowâ€™, the A-Side to the Rise exclusive 7â€™â€™ has garnered a lot of interest on blog sites for its superb, surreal concept video with the added bonus of being soundtracked by the stand out track from the album. Itâ€™s a lot slower than the rest of the album and sort of creeps up on you, before you know it youâ€™re whistling the melody in the shower! For a more immediate hit, check out â€˜Sunhitsâ€™ which provides an adrenalin shot half way through the album with its pulsing synths & driving 4/4 rhythm â€“ it really showcases the superb production on the album; despite all the layers of sound it remains, on the surface, a simple pop song. Listen a bit deeper and you will discover a bit more. â€˜Sunhitsâ€™ also showcases the versatility of Hawk, who can create high-octane indie-rock hits as well as hazier, more introspective moments such as â€˜Fell Thru Iceâ€™. The perfect album to accompany those woozy summer days in the park.