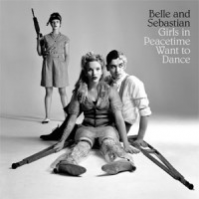 Girls In Peacetime Want to Dance

Belle and Sebastian will release their ninth studio album on January 19th.

Recently, The Quietus published an interview with Stuart Murdoch and Richard Colburn which gives a hint of what to expect. The album opens with “Nobody’s Empire,” which Stuart said “is absolutely the most personal [song] I’ve ever written.” About the beginnings of his lifelong struggle with Chronic Fatigue Syndrome which led to his first forays into songwriting, it is easily one of his most musically and emotionally epic songs.

What it doesn’t indicate is how fun the album is. Produced and mixed at Maze Studios in Atlanta by Ben H. Allen III, best known for his work with Gnarls Barkley, Animal Collective, and Raury, among others, the band – who have been listening to things like vintage Detroit techno and Giogio Moroder – have brought a dance-party element (and a disco song about Sylvia Plath) into their gorgeous tales of sensitive souls navigating a world gone awry. It is perhaps the most inspired and wide-reaching album Belle and Sebastian have ever made.