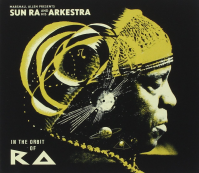 Marshall Allen Presents Sun Ra And His Arkestra: In The Orbit Of Ra

“Sun Ra said he came from Saturn, because white America treated him like an alien, like a creature from outer space, so he became one, an anarcho‐emperor of the fantastic, who made it to the moon before America or Russia, because the moon was nowhere near as far out as he could really go.“ Paul Morley. Strut and Art Yard join forces for a special release to mark what would have been Sun Ra’s 100th birthday with ’In The Orbit Of Ra’, a new collection curated by the longest serving member of the Arkestra and current bandleader, Marshall Allen. Bringing together Ra highlights from over 25 years of music, the album is the first internationally released compilation to provide an introduction to the music of Sun Ra, curated personally by the Arkestra and mastered from the original tapes. With a catalogue of well over a hundred albums, Sun Ra forged his own direction in music from the mid ‘50s until his passing in 1993, injecting space age cosmic philosophy, ancient Egyptian history and lyrical poetry into a unique and freeform jazz sound. His music evolved constantly with relentless rehearsals, live gigging and recording schedules, developing a second‐sense chemistry with his fellow Arkestra band members. Together, their emphasis would often be on improvisation and “the moment”, constantly re‐interpreting and evolving their sound. Elements of magic and ritual would regularly feature in their performances and would lend the Arkestra a mystical aura. As Sun Ra himself said, “I have many names; some call me Mr. Ra, others call me Mr. Re. You can call me Mr. Mystery.” For this exclusive new collection, Strut join forces with Art Yard to gain access to the inner sanctum of the Arkestra. In addition to the track selection, the release features recollections and contributions from some of the core Arkestra line‐up including Marshall Allen, Michael Ray, Knoel Scott and Danny Ray Thompson. For the music, Allen’s selection takes us through the huge variety and intricacy of the Arkestra’s work covering the ‘60s to early ‘80s, from the celestial blues of ‘Spontaneous Simplicity’ and ‘Plutonian Nights’ to the urgent jazz of ‘Rocket Number Nine Take Off For Planet Venus’ and ‘Dance Of The Cosmo Aliens’. The album features an exclusive previously unreleased Sun Ra track from the Art Yard archives, the acoustic ‘Trying To Put The Blame On Me’ recorded live in Rome in 1977, along with a previously unreleased Part 1 of ‘Reflects Motion’ from 1962 and an unheard extended version of ‘Island In The Sun’ from the late ‘60s. ‘In The Orbit Of Ra’ is released on 2CD, 2LP and digital formats. Physical formats feature full interview with Marshall Allen along with rare and previously unpublished photos by Val Wilmer.