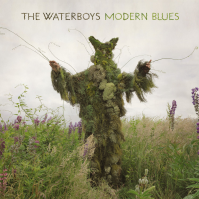 Modern Blues is an electric, soulful, bold, freewheeling rock'n'roll record with a skinful of killer new songs, some of which have been premiered live over the past few years. Ralph Salmins, a mainstay on drums for the past four years, appears alongside the talismanic Steve Wickham, who weaves a dizzying fuzz fiddle spell on several tracks. Fresh to the ranks are Memphis keyboard player “Brother” Paul Brown and David Hood, legendary bassist from Muscle Shoals, Alabama.