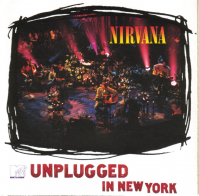 This posthumously released live album, recorded at Sony Music Studios, New York on November 18, 1993 for MTVâ€™s Unplugged series, was an intimate, acoustic session that was a definite departure from Nirvanaâ€™s previous outing, In Utero. Released within a year of Kurt Cobainâ€™s death, it topped album charts around the world, going platinum in its first week of release.

Described by the NME as an album that â€˜makes its makers sound legendary. Your hankies should be at the readyâ€™, and by Melody Maker as "a fine and unreservedly recommended album, a melancholy masterpiece", it grants the acoustic treatment to Nirvana classics â€˜About A Girlâ€™, â€˜Come As You Areâ€™ and â€˜All Apologiesâ€™, as well as a cover of David Bowieâ€™s â€˜The Man Who Sold The Worldâ€™ and closing with Leadbellyâ€™s â€˜Where Did You Sleep Last Night?â€™, a track Kurt Cobain and Krist Novoselic had previously visited on Mark Laneganâ€™s debut solo record. As one of the best albums of 1994, it was best summed up by Mojo as "â€¦a performance of raw vulnerability that served as the perfect epitaph for poor Kurt Cobain".