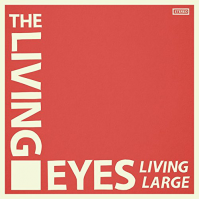 Their second full-length, 'Living Large', was recorded in a day-and-a-half by (Straight Arrows front man) Owen Penglis in his (new) Sydney hideout, Goliath Professional Recording Studio. The tapes were then driven back down the Hume highway and finished off in a couple of West Geelong bedrooms before being sent off to Australia s mixing master, Mikey Young. Taking their cues from the likes of The Easybeats, The Hoodoo Gurus, The Saints and The Hard Ons, The Living Eyes stand true to the vitriolic punk brash and sharp garage crunch of their s/t debut (2013, Antifade Records) whilst crafting some DAMN SWEET power-pop hooks. The Living Eyes are Living Large with feral wallaby beat to make you pick up your feet and a shake you just can t shake! For Fans Of Jay Reatard, Citadel Records, The Kinks, Waterfront Records, The Ramones, In The Red Records, High Voltage AC /DC