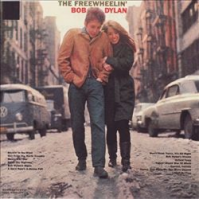 Containing many of his most striking early compositions--and sounding today far less dated than The Times They Are A-Changin', his next largely "protest" album--the guitar/voice/harmonica sound and vision of Freewheelin' remains by turns hilarious ("Talking World War III Blues"), sweet ("Corrina, Corrina"), bitter ("Don't Think Twice, It's All Right"), enraged ("Masters of War"), questing ("Blowin' in the Wind"), and all of these things at once ("I Shall Be Free"). More than any other album, Freewheelin' established Dylan as the "voice of a generation," though even that expansive title was destined to be constricting in the face of the art he would soon create.