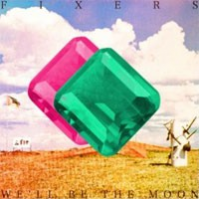 We'll Be The Moon

Fixers are a 5 piece from Oxford but have more in common with the Brooklyn brigade. Think MGMT and Animal Collective, with a similarly fresh take on psychedelia. And think the Beach Boys (they're massive BBs fans).

The band released a 7" vinyl of the track "Iron Deer Dream" through independent record label, Young & Lost Club in 2011 - before signing a record deal with Mercury-division Vertigo Records.