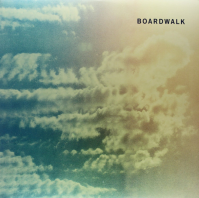 The duo of Mike Edge and Amber Q, Boardwalk are to release their self-titled debut on Stones Throw. Recorded onto two-inch tape with no overdubs in Edge s custom-built studio, Boardwalk s ten songs are catchy dream-pop accessible but ethereal, driven by traditional instrumentation, Amber s breathy vocals and Edge s all-analogue recording and production techniques. Both its warm analogue sound and themes of the dynamics of human relationships give Boardwalk a timeless quality. Though they work on separate musical projects Mike is a producer for Grammy-winning artists and Amber is a hip-hop ghostwriter and vocal coach Boardwalk have found a sound that sits at the intersection of experimental and pop, vintage and new, a sound that will appeal to fans of The xx, Mazzy Star and Sharon Van E. Boardwalk join a roster of successful crossover musicians on the indie label Stones Throw. Recent popular acts have included Aloe Blacc, Anika and Mayer Hawthorne.