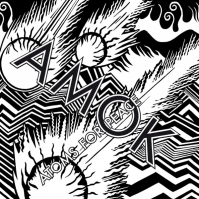 Thom Yorkeâ€™s super side-project Atoms For Peace have formally detailed their debut studio album. Though a previous report suggested Amok would arrive in January, the nine-track effort is actually set for February 26th through XL Recordings. The tracklist includes the previously revealed single â€œDefaultâ€ and â€œJudge, Jury and Executionerâ€, which the band originally debuted live. The album artwork is up above, designed by longtime Radiohead collaborator Stanley Donwood.

Speaking about the project during a recent interview with BBC Radio 1, Yorke said the group was initially formed to tour behind his solo LP Eraser, â€œbut it sparked something off. So we ended up at the end of that getting into the studio and generating some new beats.â€

In a press release announcing the album, Yorke said the band plans to tour in 2013. He explained, â€œAtoms is a ongoing and open ended project, where it leads i know not for certainâ€¦ which is what is nice about it.â€