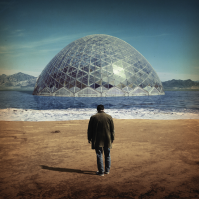 Brothers & Sisters Of The Eternal Sun

Weathered veteran singer-songwriter Damien Jurado has quietly amassed an exceptional (and, at 11 LPs and 18 EPs, exceptionally large) discography over the past two decades, and he adds to it with the release of 'Brothers And Sisters Of The Eternal Son', his latest album for Secretly Canadian. Like 2012â€²s 'Maraqopa', Jurado's new LP was produced by solo artist and Shins touring keyboardist Richard Swift. Damien Jurado is every character in every Damien Jurado song. He is the gun, the purple anteater, the paper wings, the avalanche, the air show disaster, Ohio, the ghost of his best friend's wife. It is a universe unto its own, with it's own symbolism, creation myth, and liturgy. You might go as far as to call it a religion, and your religion is a character in his religion.

This deluxe version features a second disc of songs from the album as performed by Damien and female choir Sisters Of The Eternal Son.