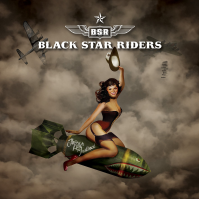 Fresh from the critically-acclaimed Top 30 debut album "All Hell Breaks Loose" in 2013, Black Star Riders return with the long-awaited follow-up, "The Killer Instinct". The band formed around the last of incarnation of Thin Lizzy and feature guitar legend Scott Gorham, Damon Johnson (guitar,ex-Alice Cooper), Jimmy DeGrasso (drums,ex-Megadeth), Robbie Crane (bass,ex-Ratt) and fronted by Belfast-born, ex-The Almighty vocalist Ricky Warwick.
October 2014 saw them gather in Nashville, TN and enter the studio with heralded producer Nick Raskulinecz (Rush, The Foo Fighters, Alice In Chains, Mastodon) to start recording the follow up. The result is The Killer Instinct. Frontman Ricky Warwick explains, "Life's not fair, never has been, never will. Sometimes you have to live with a killer instinct just to survive in the ongoing pursuit of happiness. Because nobody can do for you what you should be doing for yourself."

The energy in the studio from a year of touring, and Black Star Riders gelling as a creative force has resulted in a truly powerful sophomore effort. From the Irish-tinged rock of "Soldierstown" to the balls-out twin guitar riffing of "Sex Guns & Gasoline". From the dirty groove of "You Little Liar" to the acoustic "Blindsided", this is a band coming of age. "The Killer Instinct" will see Black Star Riders cement their place as one of the most exciting contemporary rock acts.