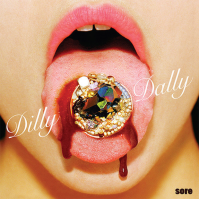 Dilly Dally’s debut album Sore is heavy and melodic. The record has nods to Sonic Youth, Yeah Yeah Yeahs, The Distillers, and even The Pogues. Monks calls it “All that and a bag of weed.” After years of rotating members (Ball and Monks have traded out three drummers and bassists), they have settled with Benjamin Reinhartz on drums and Jimmy Tony on bass. The combination resulted in a debut that sweeps the listener along into Monks’ psyche, as she screams in a coarse holler that chameleons, sliding in cadence and scale. Monks paints pictures of snakes crawling out of her head, while Ball adds simple, sparkling guitar leads that cut through the wall of fuzz and pedals. Reinhartz’s drumming is instinctual, driving forward, while Jimmy Tony carries the melody along with his simple and effective bass lines. Dilly Dally plays like one person, a unit that works to infect the audience. After a few choice singles and a 7″, the band’s debut is strong work, due in part to production from Josh Korody (Fucked Up, Greys) and Leon Taheny (Owen Pallett, Austra, Dusted).