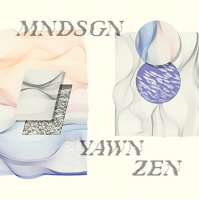 Yawn Zen is LA-based hip-hop producer Ringgo Anchetas debut album for Stones Throw. Mndsgns psychedelic beats have already won him fans such as Danny Brown, who snapped him up to produce a track the lead track for his Classic Drug Referencesrelease and BBC Radio 1's Benji B. Dazed & Confused described him as one of the west coasts finest beat-smiths each track is a patchwork of lush electronic samples blended together to create warm, sun-drenched little charmers. On Yawn Zen, his debut for Stones Throw, Mndsgn has carved himself an unusually calm-sounding place in the Los Angeles beat scene. The influence of labelmates Madlib and J Dilla on this on this collection of laid-back beats is never far off, but Yawn Zen has a psychedelic, jazzy flavour that equally recalls the likes of Flying Lotus, Gonjasufi and Samiyam.