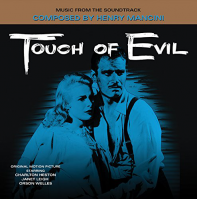 Touch Of Evil was to be Orson Welles' last studio picture, but Mancini would, of course, go on to further acclaim. Enjoy this soundtrack as the atmospheric score for a classic Hollywood motion picture - but, just as importantly, it stands as the only artefact that remains of a creative collaboration between two of the of the greatest artistic titans of the twentieth century.