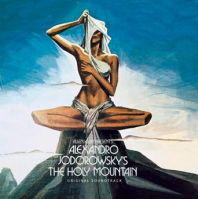 One of the ironies of the career of Chilean-born filmmaker Alejandro Jodorowsky is that while he is best known as a visual stylist, his most avid and loyal champions have often been musicians. When Jodorowsky arrived in New York from Mexico City in 1970 carrying a copy of the then-unreleased El Topo, it was the jazz producer Alan Douglas who bought the distribution rights to the film. When Jodorowsky and Douglas were looking for a venue in which to screen El Topo, it was John Lennon and Yoko Ono who asked for it to run at midnight following their short-film festival at New York’s Elgin Cinema. After six months of sold-out midnight screenings at the Elgin, it was Lennon’s manager, Allen Klein (ABKCO’s founder), who bought the rights to El Topo and agreed to produce its follow-up, The Holy Mountain. And when Jodorowsky wanted, in his words, “another kind of music—something that wasn't entertainment, something that wasn't a show, something that went to the soul, something profound,” for the soundtrack to The Holy Mountain, forward came jazz legend Don Cherry and crack studio musician (and one-time Archie) Ron Frangipane to share composing and (along with Jodorowsky) conducting duties. And, boy, did they deliver—the score to The Holy Mountain is every bit as hallucinatory as the fantastic visual imagery in the film itself. The deep, primordial chants that begin the movie, “Trance Mutation,” give way to an almost jaunty percussion-and-plucked-strings melody, “Pissed and Passed Out.” On the next track, “Violence of the Lambs,” a single flute is slowly joined by a set of mournful strings while, onscreen, Gestapo-like soldiers in gas masks parade with bloody lamb carcasses on sticks. “Drink It,” an upbeat sitar folk melody, follows, briefly accompanying the main protagonist The Thief’s ill-considered decision to guzzle tequila (or sleeping potion). Then there is “Christs 4 Sale,” a blaring orchestral riff that sounds like it was ripped from a 1950’s swords-and-sandals epic. The next track, “Cast Out and Pissed,” begins with a bee-like buzz, then is overwhelmed by a cacophony of drums, horns, and, finally, screaming. “Eye of the Beholder” which follows, changes moods entirely once again—a string section swells with overwrought romanticism. (Onscreen, a group of young prostitutes prays in a church. One of them later walks arm and arm with a chimpanzee.) And then there is “Communion,” a brooding, trumpet-led number that would be at home on the noir-steeped Chinatown soundtrack. (As “Communion” plays, the Thief is not driving through Los Angeles at night but eating the face off a statue of Christ.) This veritable cornucopia of musical styles would be more than enough to fill an entire movie. It would be more than enough to fill three movies. But in fact, the eight musical compositions described above play entirely in The Holy Mountain’s first 24 minutes. Still ahead lie the hard rock of “Psychedelic Weapons,” the pomp and circumstance of the waltz “Miniature Plastic Bomb Shop,” the gospel-inflected sax of “Isla (The Sapphic Sleep),” and so on. Every one of the 24 tracks on the film’s soundtrack presents another vertiginous twist in the philosophical and spiritual journey that is The Holy Mountain.