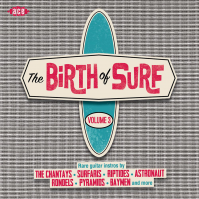 Newly compiled by the guys from Pipeline Magazine, “The Birth Of Surf Vol 3” follows the pattern of the earlier volumes in representing the influential pre-surf instrumental scene and then moving on through the genre’s prime years of 1963 and ‘64 with a selection of hits and rare gems.

Its 26 tracks includes rockin' contributions from influential acts such as Johnny & The Hurricanes, the genre-defining blast of Dick Dale on ‘The Victor’ and follow-up singles from hit makers the Chantays (‘Scotch High’s’), Astronauts (‘Surf Party’) and Pyramids (‘Pressure’), none of which appeared on their albums.

Alongside all of the big names and many hard-to-find recordings are no less than seven tracks appearing on CD for the first time. These include much sought-after rarities like ‘Bonzai’ by the Baymen, ‘Minor Chaos’ by the Treasures and ‘Static’ by the Velvetones plus a previously unreleased gem from The deFenders’ aptly titled ‘More Surf’.

“The Birth Of Surf Vol 3” is a match for its successful predecessors. It’s an exciting listen, an attractive purchase for the casual buyer and an essential acquisition for collectors.