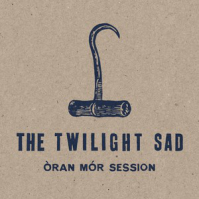 Almost a year since the release of their acclaimed fourth album Nobody Wants To Be Here and Nobody Wants To Leave, Scotland’s The Twilight Sad return with the Òran Mór Session LP: a collection of reworked, stripped-back versions of tracks from the album, b-sides and a cover of Arthur Russell’s ‘I Couldn’t Say It To Your Face’. The sessions act as something of a means to recap and reflect on what’s been a whirlwind past year for the band, with Nobody Wants To Be Here and Nobody Wants To Leave earning rave reviews from publications including The Sunday Times, The Quietus and Q, alongside topping Drowned in Sound’s best albums of 2014 and earning a rare perfect ten from the site, finishing second in The Skinny’s list, third in Popmatters’ indie rock albums of the year and topping Any Decent Music’s Scottish albums of the year.

"It’s not until you assemble – no, grow, because this is nothing if not organic – the whole thing, that the jaw-dropping brilliance of the album reveals itself." - Drowned in Sound (10/10)

"Simple but effective, the lyrics are bleak, bitter phrases of existential loneliness and torment. His emotion hits just as potently throughout." - NME (8/10)

"The group's fourth LP more than justifies [their] ascension. Where there were youthful, wayward meanderings, Graham has emerged a man, exorcising the sorrows of lessons learnt along the way." - The Quietus