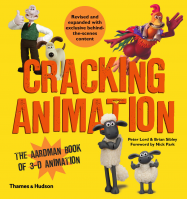 Aardman Animations are, unquestionably, one of the biggest success stories in animated films: their masterpieces include Wallace and Gromit, Chicken Run and Shaun the Sheep, as well as much-loved characters such as Morph. Cracking Animation is entertaining, inspiring and essential reading for all Aardman enthusiasts, students of animation or anyone who wants to try making an animated film. This revised edition includes two new chapters. Chapter 7 looks in depth at the development and teamwork involved in a major animated film or television production, using The Pirates! In an Adventure with Scientists! as an exemplar, and Chapter 8 presents exclusive behind-the-scenes insights into the making of Aardmans most recent feature film, Shaun the Sheep the Movie. Packed with practical, fully illustrated and step-by-step descriptions of all the elements involved, this is quite simply the best publication on stop-motion animation.