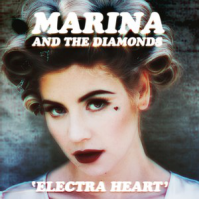 Marina And The Diamonds

Marina and The Diamonds is set to release her 2012 UK Number 1 album ‘Electra Heart’ on vinyl for the first time.

Electra Heart was the second studio album by Welsh singer Marina Diamandis, professionally known as Marina and the Diamonds. It was released on 27 April 2012 by 679 Artists and Atlantic Records. Diamandis collaborated with producers including Liam Howe, Greg Kurstin, Dr. Luke, Diplo, and StarGate during its recording, and subsequently transitioned from the new wave musical styles seen throughout her debut studio album The Family Jewels (2010). Their efforts resulted in a concept album inspired by electropop music, a distinct departure from her earlier projects; its lyrical content is united by the topics of love and identity. Diamandis created the titular character "Electra Heart" to represent female archetypes of stereotypical American culture.