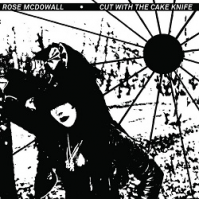 Cut With The Cake Knife

Cut The With The Cake Knife was recorded by Rose McDowall in 1988/89 following the break up of her group Strawberry Switchblade. Produced with the aid of several musicians in several studios, the album features songs written for the fabled second Strawberry Switchblade album. More importantly perhaps it showcases the honest, direct and life-affirming songs of one of the greatest unsung songwriters of the modern pop era at a tumultuous time in her career.

Tibet opens the set and could be one of the best pop songs you’ve never heard. The innate sadness of the songs’ content – the loss of a friendship, impending sorrow – is heightened to heart-melting level by McDowall’s pop nous and melodic sensibility. Choruses and hooks are everywhere on Cake Knife, from the outsider take on stadium 80s pop in Wings Of Heaven to the spiraling, ecstatic So Vicious, a glorious anthem that highlights the human fragility in McDowall’s vocal performance, an instrument that has never lost the naïve purity it first exemplified in Strawberry Switchblade’s early 80s recordings. The centerpiece of the album, the title-track, is the greatest Switchblade pop chart hit that never was. Like the veiled melancholy of her former group’s hits, Cut With The Cake Knife hints at a darkness beneath the gloss, a darkness that saw McDowall delve into more esoteric territory with her subsequent recordings and collaborations. Cut With The Cake Knife serves as the bridge between the pop music McDowall had been making with her friends Jill Bryson, Lawrence from Felt and Primal Scream to what became a more extreme, deep sound informed by neo-folk and post industrial music.

Rose McDowall’s role in the canon has always been one of an outsider. Beginning in Glasgow’s East End in the avant proto-noise group The Poems, achieving fame briefly in the 80s and then disappearing into counter-cultural folklore, the emphasis in the internet-age has been skewed towards her image and cultural significance. Unseen to many, her solo work, her groups Sorrow and Spell and her collaborations with a whole host of underground luminaries have still touched lives. As McDowall elucidates: “They're real sad songs, about real life. I've had people come up to me to say I'd connected with them and helped them. I remember a gig in America when we made a whole room cry. It was bizarre. A couple at the front of the stage started crying and then these two boys beside and suddenly everyone was crying. And I thought, "that's power."