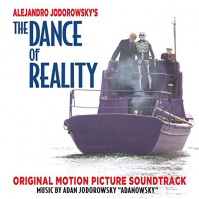 The Dance Of Reality

The release in 2014 of The Dance of Reality marked the triumphant return, after a 23-year hiatus, of Alejandro Jodorowsky, the visionary Chilean filmmaker behind cult classics El Topo and The Holy Mountain. In the radiantly visceral autobiographical film, a young Jodorowsky (played by his son, Brontis) is confronted by a collection of compelling characters that contribute to his burgeoning surreal consciousness. Adding to the autobiographical nature of the work, the film was shot in Tocopilla, a coastal town on the edge of the Chilean desert, where the filmmaker was born in 1929. Blending his personal history with metaphor, mythology, and poetry, The Dance of Reality reflects Jodorowsky’s philosophy that reality is not objective but rather a “dance” created by our own imaginations.

Jodorowsky’s films have always placed a special emphasis on music—his soundtracks rank as among the most daring and fascinating in film history—and for The Dance of Reality, Jodorowsky tapped his own son Adan Jodorowsky (a.k.a. “Adanowsky”), whose work as a composer and performer (with Devendra Banhart among others) has won him an international following in his own right. Adanowsky’s score is alternately lush and comical, blending brooding string passages with hypnotically repeating piano figures that create a mood that is at times foreboding, at times wistful and, as is always the case with a score to a Jodorowsky film, surreal.