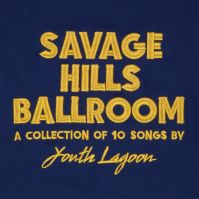 Often perceived as a recluse (his first LP is called 'The Year of Hibernation,' after all), on 'Savage Hills Ballroom' Trevor Powers has fully opened himself to the world for the first time ever. The 10-track collection is his most ambitious, unguarded work to date, recorded in Bristol, UK and mixed/engineered by Ali Chant (PJ Harvey, Gravenhurst).

While touring on his last record, 2013's 'Wondrous Bughouse,' Powers got a call that one of his closest friends had unexpectedly passed away, forcing him to cancel the rest of the tour and head back to Idaho. He says, "that experience made me start viewing Youth Lagoon differently - it was a complete refocus for me."
This sense of gilded rebirth floods the instrumentation on 'Savage Hills Ballroom' – Power’s vocals are largely unadorned and his pop-conscious electronics reach new feats of precision. Meanwhile the lyrics explore darker territory. "Kerry" is the story of Powers' revered uncle whose drug addiction led him to running from the law for most of his adult life, while "Highway Patrol Stun Gun" imagines Biblical end-times through the lens of the recent cases of police brutality.

NPR called 'Wondrous Bughouse' “the most arresting headphones record you'll hear all year,” but on 'Savage Hills Ballroom' Powers has taken off the cans and made a record meant to communicate, rather than shut out. “I think I've had a lot of barriers in my life in general that I don't let people past, and I've gotten really sick of all that,” he explains, “It's too tiring trying to pretend you don't have as many flaws as everyone else.”

2011’s ‘The Year of Hibernation’ was one of the best reviewed debuts of the decade, and ‘Wondrous Bughouse' earned similar raves from Pitchfork (multiple Best New Musics), NY Times, SPIN, NPR + more. Youth Lagoon has toured with everyone from Father John Misty to Majical Cloudz, and in 2013, they performed at the Barclay's Center in Brooklyn with The National.