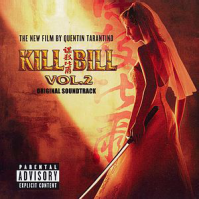 In many ways, the soundtracks that director Quentin Tarantino commissions are as iconic as his films, and Kill Bill Volume 2is no different. The combination of dialogue snippets and songs reflect the atmosphere of cold-blooded revenge that's the central theme of the film. And, as expected from Tarantino's soundtracks, there's been some clever digging through the archives once again. Wisely, there are three tracks from legendary soundtrack composer Ennio Morricone, who made his reputation with his spacious Western epics, all of which add some heavy menace. And rockabilly has rarely sounded as threatening as the reverb-heavy Charlie Feathers' track "Can't Hardly Stand It". Perfectly complementing the dust-and-tumbleweeds on offer is "A Satisfied Mind", from Johnny Cash's acclaimed Rick Rubin-produced later years, weighing the soundtrack down with even more gravity. Kill Bill Volume 2 is rarely a jolly listening experience, but that's very much to its credit. Tarantino's previous soundtracks have often veered rather too close to the cartoonish, mixing levity with brutality; Kill Bill Volume 2 remains stone-cold throughout.