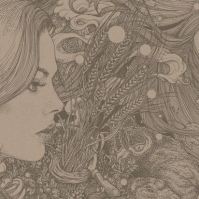 The 40th Anniversary Edition has a different track listing to the preceding OST double album, selecting only the songs to make a single LP. Giovanni had always intended to release the soundtrack on vinyl as an album of songs, but this never happened due to the film’s troubled past,and consequently the existing soundtrack includes extra incidental music.
This pressing is unique, presenting the music as an album of those songs - the only time Paul Giovanni’s musical vision for the film has been accurately represented on record.