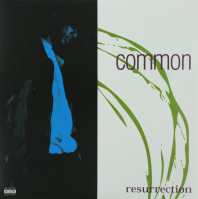 Although Chicago is often praised for its blues, jazz, and house music, the city has failed to be successful when it comes to rap. One of the few Chicago MCs who has enjoyed any type of national attention is Common Sense, whose complex style of rapping and jazz-flavored tracks inspire comparisons to De La Soul, Digable Planets, A Tribe Called Quest, and the Pharcyde. On his sophomore effort, Resurrection, the South Sider doesn't hesitate to let you know that he has considerable technique, and in fact, he sometimes displays too much of it for his own good. Nonetheless, his intelligence, wit, and originality make this CD impressive. Resurrection's standout track is "I Used to Love H.E.R.," which seems to describe a lover's moral and spiritual decline, but is actually addressing what Common views as hip-hop's decline (in particular, gangsta rap's exploitation of sex and violence). Also quite noteworthy are "Nuthin' to Do" (which speaks out on the deterioration of Chicago's neighborhoods), and the introspective "Book of Life," a commentary on trying to keep it together in a society that has lost all traces of sanity