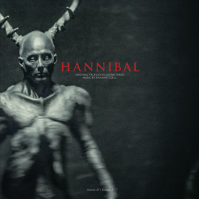 Invada Records are proud to announce the vinyl release of two volumes of music from season 2 of hit NBC television series HANNIBAL by Brian Reitzell. The two volumes of music come spread across two double LPs with each volume released on two different variants - 140gram black vinyl and travertine grey for Season 2 Volume 1, and 140gram black vinyl and hemochrome red for Season 2 Volume 2. Accompanying the release, director David Slade has provided rare photos from his personal collection for the artwork. Each double LP is housed in a gatefold sleeve and comes with a download card. The limited edition release (2500 copies per volume) is set for release on December 15th 2014. All of the music featured on the Hannibal LP's hail from the second season of the series and have been sequenced in the chronological order they appears on the show itself, allowing for an essential listening experience as dictated by the music's creator. Over the last decade and a half, multi-instrumentalist, composer, producer and music supervisor Brian Reitzell has been on a mission to further elevate the layer that music adds to a film's life. He has created his own unique method of scoring films, drawing equally from his experience as a recording and touring musician with bands such as Redd Kross and Air, and his massive knowledge of recorded music. Acting as both music supervisor and composer, he often blurs the lines between score, source music, and sound design. His vision is to create a seamless landscape of songs, score, and found music for each soundtrack. Brian's explorations of new sounds add unique character to visual images. He often has instruments custom built or even invented for individual film scores and wholeheartedly embraces the Brian Eno philosophy of the recording studio as his instrument. Brian has thrived on collaborations with musicians from outside the Hollywood film composer network and has worked with some of today's most acclaimed musical artists including Air, Richard James (Aphex Twin), Kevin Shields (My Bloody Valentine), Elliott Smith, Britt Daniel (Spoon), Jim James (My Morning Jacket), Explosions In The Sky, Fever Ray, Robert Plant, Daniel Lopatin and Ensemble Matheus. Brian's past films include THE VIRGIN SUICIDES, LOST IN TRANSLATION (for which he received a BAFTA award nomination), CQ, FRIDAY NIGHT LIGHTS, STRANGER THAN FICTION, THUMBSUCKER, MARIE ANTOINETTE, THE BROTHERS BLOOM, 30 DAYS OF NIGHT, BEGINNERS, and RED RIDING HOOD. His video game credits include his critically acclaimed score for THQ's RED FACTION: ARMAGEDDON and the upcoming WATCH DOGS for Ubisoft. Reitzell scored Turner Prize winner Elizabeth Price's WEST HINDER video installation. He has also scored and music supervised Sofia Coppola's latest feature, THE BLING RING as well as Gus Van Sant's PROMISED LAND.