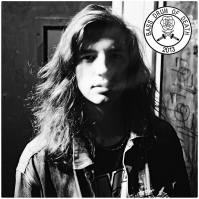 It's been a little more than a year since John Barrett and his punk band Bass Drum of Death put out their debut album - a year that took this kid from a sleepy Mississippi hometown (where the bars close at midnight) to performing encores in front of 5,000 screaming Europeans and playing with Hodgy Beats and Left Brain of Odd Future on live TV. Whilst on tour he always had new songs rattling around in his head and when it was time to get them out he didn't let anything get in the way, taking all-night detours to his house to conduct emergency recording sessions before heading back out on the road the following day. After touring Europe extensively and returning home with his inspiration and his instruments, Barrett spent the autumn of 2012 in his studio smashing out punk rock. This time it was just himself, lots of coffee, a Realistic reverb unit to give everything that stoned-in-outer- space feeling and for the first time in Bass Drum of Death history, a bass that he used on every track. Like his debut, GB City, Barrett recorded the entire thing on GarageBand. Bass Drum of Death's self-titled sophomore album is released on Innovative Leisure, the new Los Angeles label that already counts Allah-Las, Rhye, Hanni El Khatib and Nosaj Thing amidst its early successes.