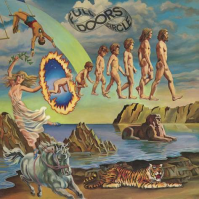 After the legendary singer Jim Morrison died in 1971, the surviving members of The Doors – drummer John Densmore, guitarist Robby Krieger, and keyboardist Ray Manzarek – continued to make music together as a trio and went on to release two more albums: OTHER VOICES and FULL CIRCLE. For years, that music has only been available digitally.

The vinyl edition of each album will be pressed on virgin 180-gram vinyl and will come packed in historically accurate sleeves. That includes the wild, foldout zoetrope that came with FULL CIRCLE. Once assembled, this basic animation device depicts the human life cycle of a man from infancy to elderly.

With Krieger and Manzarek now sharing vocal duties, OTHER VOICES was released in 1971, and featured the two singles “Tightrope Ride” and “Ships w/ Sails.” Following a successful U.S. tour, the trio returned to the studio in 1972 to begin recording FULL CIRCLE, which came out that summer. The sound incorporated more jazzy elements into the arrangements on several songs like “Verdilac” and “The Piano Bird.”