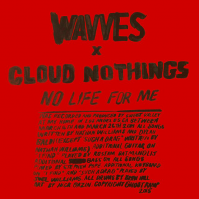 No Life For Me

Meet Nathan Williams and Dylan Baldi, the scraggly yin and yang of a very particular subset of pop punk. Williams is a consummate Southern Californian and the walking embodiment of a contact high. More to the point, he’s also the singer-songwriter behind Wavves, a hugely successful slacker-punk project that’s been credited with breathing new life into a tired genre — even if that breath contains a trace amount of THC.

Baldi, while not quite Williams’ opposite, certainly makes for an interesting character foil. The Cleveland native and frontman of Cloud Nothings has had a similarly outsized influence on the punk landscape, though you wouldn’t be able to tell from his notoriously reserved demeanor. Baldi gives off the impression of someone who actively tries to get lost in his music during a show; he’ll often close a set by stretching the 9-minute “Wasted Days” into an even longer jam, burrowing into its creases as if to preserve himself from the hundreds of attentive eyes trained on his every move. He’s the stereotypical bedroom musician thrust into the limelight, while Williams sometimes gives off the impression that fame and excess are his two favorite foods.

For all their differences, a Wavves/Cloud Nothings collaboration makes a good deal of sense, and fans have been eagerly anticipating an album since it was officially announced back in March (and word had been circulating a year before that). Both acts are at the top of their respective games and have little to lose if the pairing doesn’t work out; this kind of thing is fairly unprecedented, after all, so any failure would be a noble one. The good news, now that No Life for Me has dropped out of the blue, is that it’s anything but a failure. This lean, 9-song set might not be more than the sum of its parts, but it highlights the strengths of both musicians while reining in some of their more indulgent tendencies. The end result is a summery slice of punk that’s more SoCal than Ohio, even if Baldi can’t help but smear his unique brand of melancholy all over standout tracks like “Nervous” and “Nothing Hurts”.

From a creative perspective, one suspects that Williams benefits more from the pairing than Baldi. The guy can write a hook and roll a blunt with the same precision, but his recent output hasn’t been his most focused; sometimes, the curtain of fuzz is so thick that it snuffs out the flickering flame of melody beneath. Baldi, meanwhile, always seems in control of his compositions, even when he’s using them to explore unknown reaches of the mind. He exercises a bit of that control here, never allowing a song on No Life for Me to get too out of hand.

The album’s weakest tracks are the two untitled instrumentals. The first could actually stand to be fleshed out a bit, as its interweaving guitar melodies feel like part of a larger, more expansive composition. With that said, No Life for Me really storms out of the gates with “How It’s Gonna Go”, a song that maximizes the potential of this collaboration in a way the album never quite tops. The conventional soft-loud dynamic is reversed, with Williams charging forward on the verses and Baldi taking over on a chorus that feels like the eye of the storm. “I feel it open up around me,” he sings, in a tone that’s almost stricken with awe. He’s learned to mine for his hooks in the open spaces between notes, and it’s brought him closer than ever to the platonic slacker-rock ideal set forth by Pavement: Try really hard, then make it seem like you aren’t even trying.

“Come Down” also plays off the dynamic between soft chorus and driving verse, though even when this album is at its heaviest, something about it seems sedated, sapped of energy like a sticky summer afternoon. This isn’t a criticism so much as a point of reference, and it’s almost nice to hear Baldi lean less on his primal scream and more on a soft coo that sounds like it’s coated with cough syrup.

One might argue that this is a “slight” album, pointing to the songs’ short lengths and general lack of epicness as signs that it falls short of greatness. That’s true in a sense, but it also misses the forest for the trees. No Life for Me is deeply indebted to early 1980s Southern California punk, a scene that’s probably buried deep in the soil of Williams’ mind by this point. Traces of the Minutemen surface in the pinch harmonics in “Come Down” and the dissonant bridge in “Hard to Find”, and Black Flag’s influence is apparent in the duo’s “get in, get out, and cause as much damage as you can” approach to songwriting. This is pop music executed with the no-frills precision of hardcore, and a 45-minute opus simply wouldn’t make sense in that context. No Life for Me’s short length lends itself to repeat listening, which in turn lends itself to intimacy. It doesn’t hurt that the whole thing sounds as if it were recorded straight to cassette.

Given the mostly thrilling results of this collaboration, it’s a bit of a letdown that the album’s final two tracks, “Such a Drag” and “Nothing Hurts”, would seem more at home on a Wavves and Cloud Nothings album, respectively. A Williams composition, “Such a Drag” lacks a defining hook and doesn’t capture the same magic that pops up elsewhere in spades. Baldi’s “Nothing Hurts”, on the other hand, evokes more pathos than maybe anything he’s done before; it’s a beautifully understated pop song and a fitting way to end an album that specializes in low-key flashes of brilliance. No Life for Me may not be a masterpiece, but it does offer a wobbly, hazy shape of a certain kind of punk to come. And, like true slacker icons, Williams and Baldi sound like they’ll probably be asleep when it arrives. - Consequence Of Sound