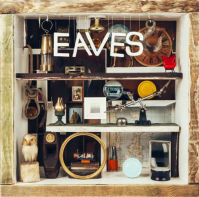 Anybody’s first impression on hearing Joseph Lyons aka Eaves might reasonably be how old he sounds. He even has a song titled As Old As The Grave, which could be a reasonable description of a voice which sounds like it has been simmered in oak vats since time immemorial. The next thing that strikes you is the wisdom in his words – dark yet unusually spirited tales of love, death, hope and alcoholism which have reduced audiences to attentive silence at gigs, festivals and on tours with the likes of Slow Club and Nick Mulvey, whose gigs he traveled between via a National Express coach, “carrying my guitar bag on the bus!”

Heavenly Recordings’ exciting new signing could be the north’s answer to Nick Drake, if the singer-songwriter-pianist wasn't such an amiable and chatty 23-year old, who listens prog metal bands such as Opeth and Mastodon as well as Neil Young and Joni Mitchell, who describes his music as “this weird psych singer songwriter sound” and whose lyrics display thoughts and wisdom far beyond his years.