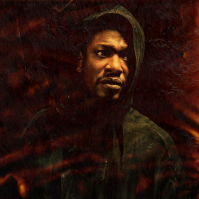 Not only one of Britain’s greatest musical artists, but one of the greatest lyricists full stop, Roots Manuva is back with a dazzling new album, Bleeds. Past collaborations with everyone from Gorillaz to the Maccabees to Leftfield to Coldcut to the Cinematic Orchestra, Rodney Smith’s influence can be heard right across the musical landscape. Now, with his sixth studio album, he has made his most concise and focussed record to date, his most emotionally affecting and powerful release since his breakthrough, Run Come Save Me.

Drawing upon production assistance from young British producer, Fred, together with musical heavyweights Four Tet, Adrian Sherwood and Switch’s new production team, With You, the title of the record is, in the man’s own words, an “egocentric jest of daring to do things in the tradition of Jesus: I’m ready to bleed for the artform.” It is, of course, also a reference to the way in which genres, in the sonic world of Roots Manuva, have a tendency to bleed into one another, so that hip hop, reggae, techno, funk, neo-classical, all blend together to create “liquid soul, the blood, the bleeds that paint infinite sacred wonders in our dreams and unfold in our day-to-day.”

One of the true pioneers and originals of British music, any album from Roots Manuva is an event. When it’s as good as Bleeds it’s one of the musical events of the year. Both genre-defying and deeply rooted in what he describes as “the culture of Bass and Verb,” the record innovates and consolidates in equal measure. Rodney Smith describes himself as “a British Black musical Mark Rothko” and Bleeds is another masterpiece from this abstract wordsmith.