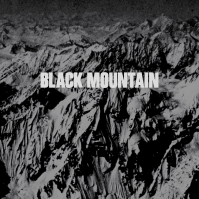 It’s only a cliché because it’s true, but the greatest records are timeless. Black Mountain’s self-titled debut album is just such a record. It is a new classic rock, with reference points arcane and clear, its sound fresh, unfamiliar and irresistible. The work of a small collective of musicians operating from Vancouver, Canada, far from any industry buzz but firmly in the eye of their own storm of creativity, Black Mountain’s debut album was, of course, a beginning, but it also marked an ending.
Begun as the fourth album for Jerk With A Bomb, the 4-track bedroom project turned non-rock band led by Stephen McBean that preceded Black Mountain, the songs grew from skeletal sessions cut by McBean and Josh Wells and honed on the road in empty North American clubs along with Amber Webber. “We'd lay down the bed tracks, the guitars and drums,” remembers McBean. “Matt [Camirand, bass] joined, and we changed the band name after a dream of how life could be different in the B section between Black Flag and Black Sabbath. Josh’s roommate Jeremy [Schmidt, keys] was lurking about. We asked him if he wanted to add some synth bleeps or whatever. He came back with all these orchestrated keyboard parts, and we said, ‘Oh, you should probably join the band now.’”

They cut the album at the Hive and their jam space in Vancouver, recording in “a big cement room with a tall ceiling, nice boomy acoustics, lots of natural reverb, on an 8-track reel-to-reel tape recorder.” During the sessions, these elemental first tracks found their true shape: wry & giddy, hypnotic & gracefully heavy, the dark and powerful blues, and mysterious chugging murk.