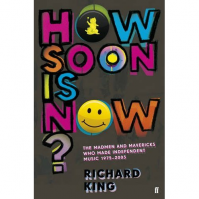 How Soon Is Now?

If you look at all the people involved - Ivo, Tony Wilson, McGee, Geoff Travis, myself - nobody had a clue about running a record company, and that was the best thing about it.' - Daniel Miller, Mute Records Richard King's How Soon Is Now? is a landmark survey of the record labels that make up the backbone of the independent music industry and the hugely inspirational, eccentric, impulsive and visionary figures who created them. One of the most tangible aftershocks of punk was its urgency to prompt individuals into action. Document your reality: do it yourself. From this, a generation was inspired and, with often zero financial planning or business sense, in bedrooms, garages and sheds, labels such as Factory, Rough Trade, Mute, 4AD, Beggars Banquet, Warp, Creation and Domino began, shifting the musical landscape and trading on an ethos and identity no brand consultant would now dare dream of. Musicians were encouraged to do whatever the hell they wanted and damn the consequences. From humble beginnings, some of our most influential artists were allowed to thrive: Orange Juice, New Order, Cocteau Twins, Depeche Mode, Happy Mondays, The Smiths, Sonic Youth, Primal Scream, My Bloody Valentine, Aphex Twin, Autechre, Teenage Fanclub, Broadcast, The White Stripes, Franz Ferdinand, and Arctic Monkeys, to name but a handful. This is the story, set to an incredible soundtrack, of the enormous scale of the passions, the size of the egos, and the true extent of the madness of the mavericks who had the vision and bloody-mindedness to turn the music world on its head.